Lawrinson Hall is a dormitory on the Syracuse University main campus. It is located at 303 Stadium Place and was built in 1965.[1]. Lawrinson Hall is often referred to as L-town by its residents. Kimmel Hall is on the Quad Shuttle route and the Connective Corridor. The schedules can be found at . The Facebook page for Lawrinson can be found at https://www.facebook.com/LawrinsonHallatSU. 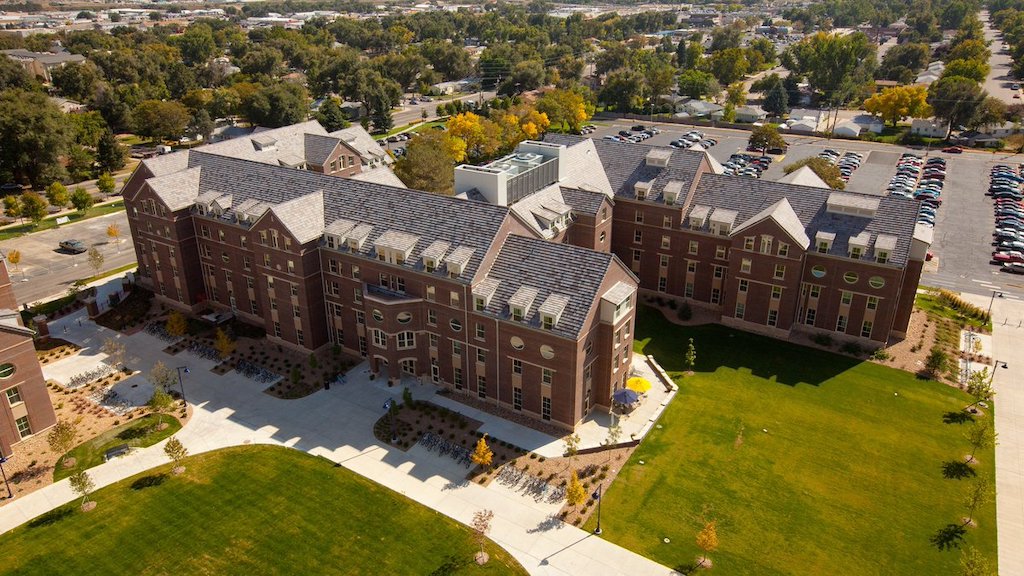 Lawrinson Hall is located behind and to the left of the Carrier Dome. It is one of Syracuse University’s more isolated dormitories because of its distance to the quad. It is about 15 minutes away from the quad and is next to Sadler Hall.

Lawrinson Hall is home to 537 residents – mostly freshman and sophomores. It has 18 floors for residents and 21 floors in total. The height of the dormitory makes it one of the most visible buildings when driving into or out of the Syracuse University area.During the winter season a lot of wind picks up near the higher floors of the building. Window screens are known to fall off when the wind picks up and often times, when the wind is really bad. Often times it feels like the building is shaking, especially for residents on higher floors. Students report a constant whistling sound on the upper floors and were particularly unsettled during Hurricane Sandy in fall of 2013.

Renovations finished in 2011 so every floor is either brand new or was just renovated with new furniture and bathrooms. With the new renovations (including 6 private bathrooms), each floor is now coed instead of before when each floor was single sex with one bathroom.

Each floor has their own laundry facilities. The dock is extremely helpful when it is time to move in and out of the dorm. The first floor contains the main desk, mailboxes, and a University Bookstore branch. The second floor has a computer cluster and printers as well as games and a lounge area with a TV. Games include table tennis and pool. Equipment can be checked out of the main desk with a SU ID every day of the week. Floors three through 21 are dorm rooms and floor 21 contains a penthouse for Hall events and meetings, though it is not always accessible by residents. There are three elevators, however only one goes to the second floor and basement. Additionally, the elevators often take a while because there are so many residents.

Lawrinson Hall is coed on each floor. In addition to 18 dorm rooms, each floor contains 6 private bathroom, a lounge with couches and a TV, a study room, a microwave and 2 sinks. The study room has been renovated, however they are small, but they have a nice view of the city at night. The lounge is a good size and nice for meetings or watching TV with friends and/or floor mates.

There are 15 dorm rooms on every floor. One is for the RA, nine are split doubles, one is a single, and four are corner doubles. The split doubles are usually reserved for incoming freshmen.[2].

The closest Dining Hall to Lawrinson is Sadler Dining Hall, which is less than a minute walk away. Sadler Hall is right next to Lawrinson and there is even an underground tunnel that some students use to avoid the snow or other bad weather conditions, however because it is so close, the tunnel is hardly used. Lawrinson Hall also has a University Bookstore branch, which sells food such as chips, soda, frozen food, dry foods such as crackers and mac and cheese, and ice cream.